“I saw an immense vertical electric sign, which I made out to be the Eiffel Tower.”

— Charles Lindbergh, on reaching Paris during the first solo nonstop flight across the Atlantic Ocean. May 20-21, 1927

In 1927 Charles Lindbergh made his famous flight across the Atlantic Ocean from New York to Paris. At that time the Eiffel Tower was being used as a giant sign consisting of 250,000 lights and advertising the company Citroen. The “immense” electric sign helped guide Lindbergh to his final destination, becoming an unexpected participant in aviation history.* 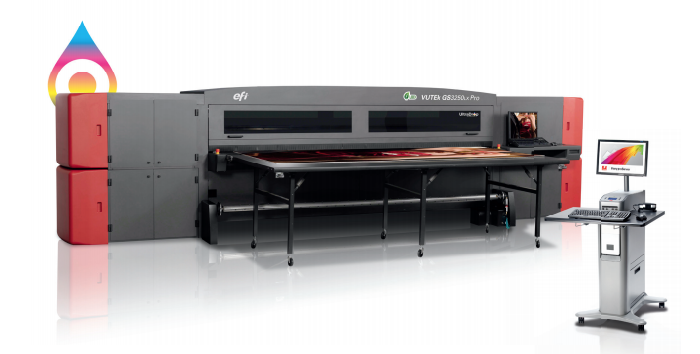 Whether immense, grand, colossal, enormous, gargantuan, or even titanic, mankind has been creating large format signs and sign structures to send messages to the masses from our beginnings.

Nazca Lines geoglyphs formed by depressions or shallow incisions made in the soil of the Nazca Desert in southern Peru. Created between 500 BCE and 500 CE. By Diego Delso, CC BY-SA 4.0,

Ancient civilizations looked to the earth itself as a canvas. As early as 500BCE and 500CE Nazca lines formed very large geoglyphs in the Nazca Desert of Peru creating symbols large enough to be seen from high altitudes — perhaps a type of “Advertising Space Available” message to the sign Gods?

Year by year, the number of large banners, billboards, window wraps, digital billboards etc. multiply exponentially. In major cities they now dominate the cityscape, influencing where to shop, what to buy and even how to act.  Although long beleaguered as visual chaos, the art of the sign has not only survived, but continues to thrive.

“Signs give cities their unique character in the face of encroaching hegemony where every main street looks the same, and small businesses are crushed by megaliths. They connect us to the past, to vernacular styles, to folklore. The best examples catch our eye as children and stay with us, and the public respond to them with great affection and outrage when they are endangered.” — Darren Anderson, How Advertising Conquered Urban Space 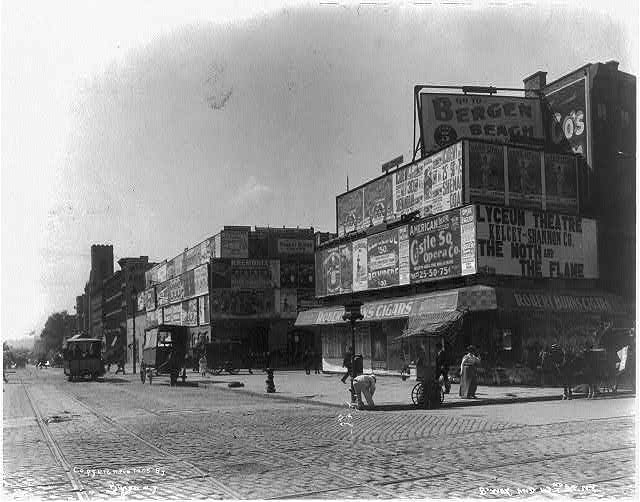 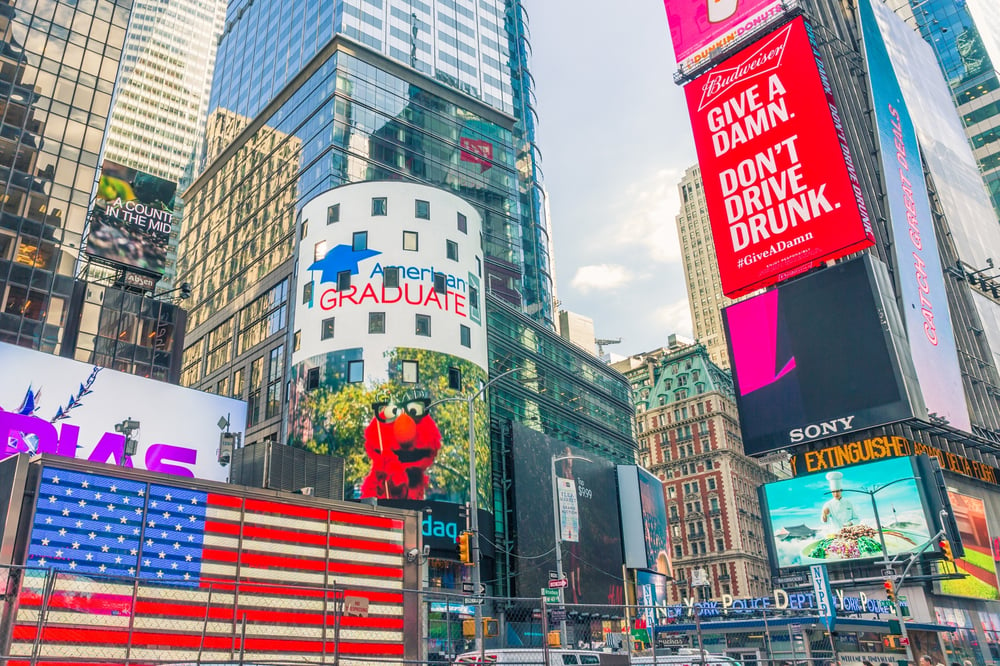 Long Nguyen, Account Manager at Marketshare, a marketing leader in the home building industry for over 30 years, believes his team has perfected the art of “grand format” signage in high density, urban environments.

“Due to the extreme housing need in the Bay Area and the land shortage, multi-family developments are booming. High density is the solution, everybody is going up! These massive multi-family buildings create a giant canvas — a great opportunity for large format marketing campaigns. Marketshare helps builders advertise their multi-family product with grand format sign solutions.”

“Great sign design really is the art of being seen. Graphic design, messaging, size, structure and placement all matter. Actually, how creative the sign solution is can make the difference — is it surprising or unexpected?” Said Nguyen. “But really, there is a reason builders are coming to us for grand format signage, grand signs make a grand impact!" 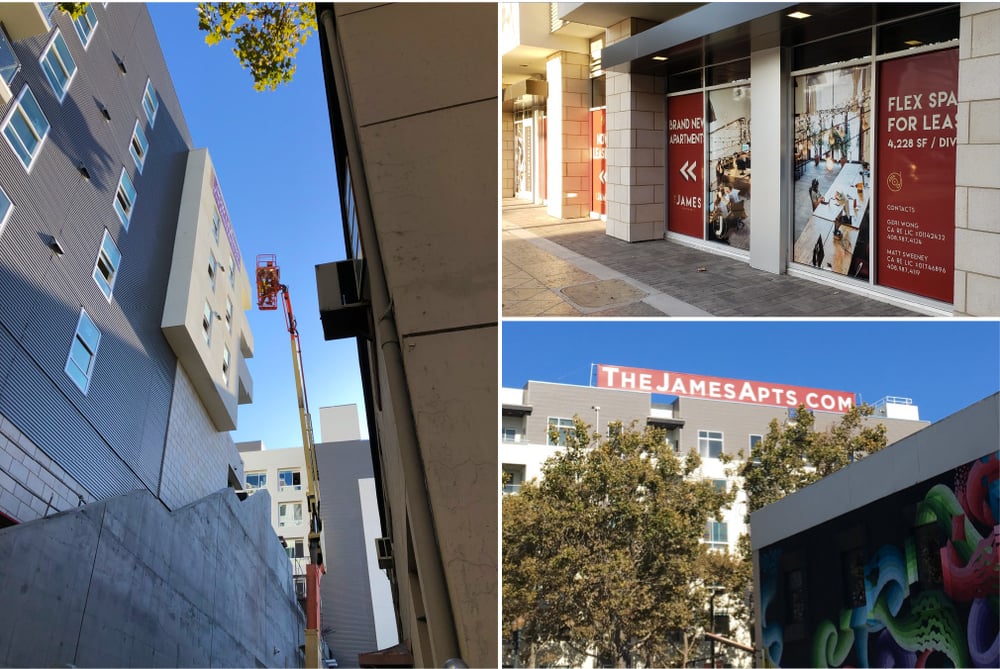 Installation of the grand format rooftop horizontal banner and window clings by Marketshare at the James Apartments.

“We target locations on the building that will have the highest impact and customize around architectural details with unique solutions that cater to the building size, facade and footprints.” Nguyen explained. 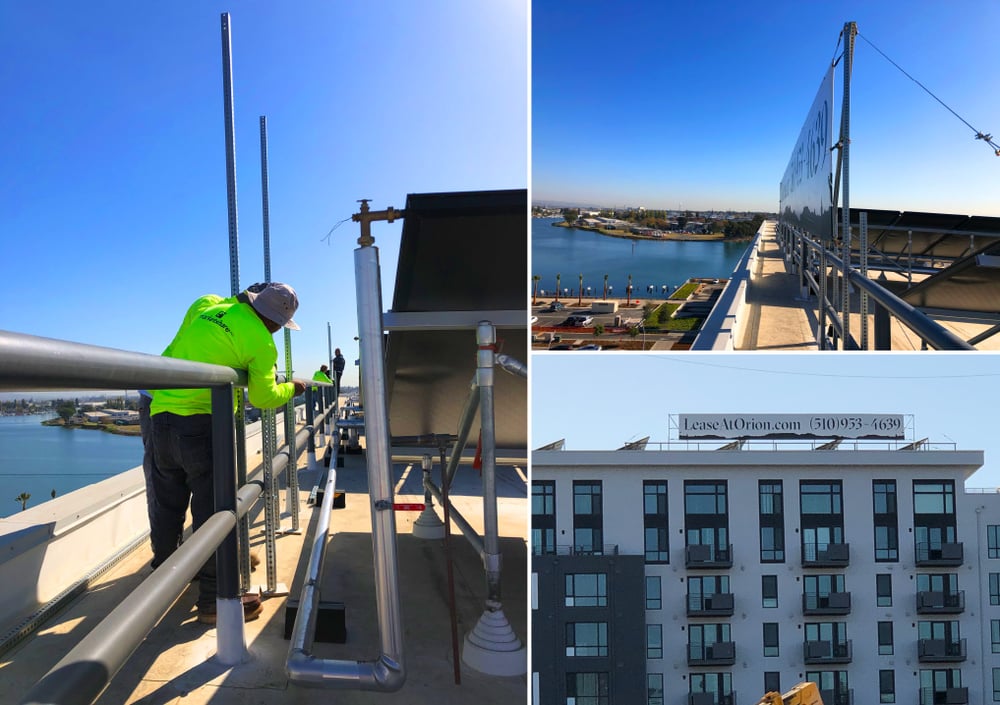 Marketshare installs grand format rooftop banner at Orion with a free-standing structure that does not fasten to the roof or wall.

“Everything we do is custom. Building spaces range from just stucco or painted siding all the way to highly detailed exterior architecture. We have a solution for each. For instance, If we have a building where we can’t puncture the wall, we plaster on an adhesive vinyl sign over stucco (see video). 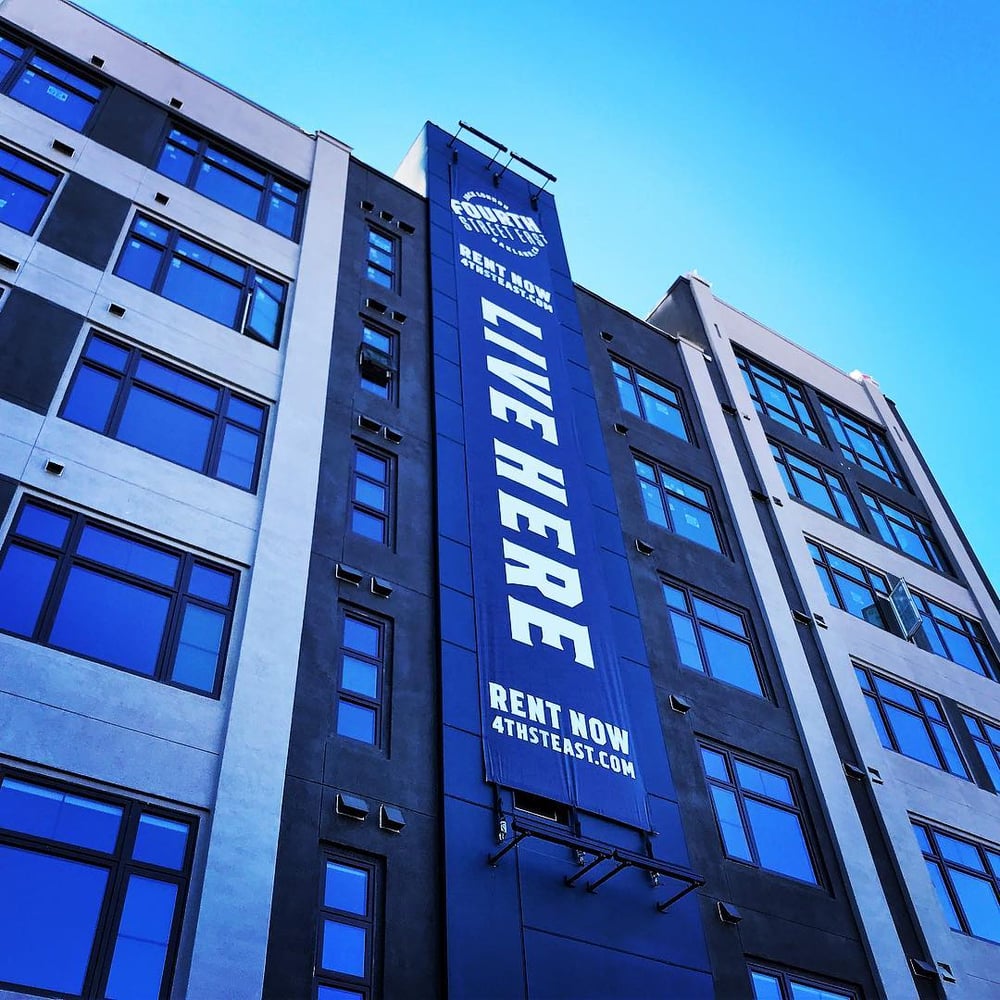 The grand format signs that Marketshare produces for home builders will join their predecessors in the collective sign history. To many, they may be just another sign on another building, but, to some, they are an “immense” beacon guiding them to their destination — to home.

Marketshare collaborates with the best teams in the homebuilding industry. Our passion and commitment come through in every design, interaction, and completed sales environment. Our capabilities include design, fabrication, assembly, and staging of sales centers, design centers, marketing spaces and signage.

Don't Miss The Next Article:

7 Sales Center Design Trends You Will See In 2020